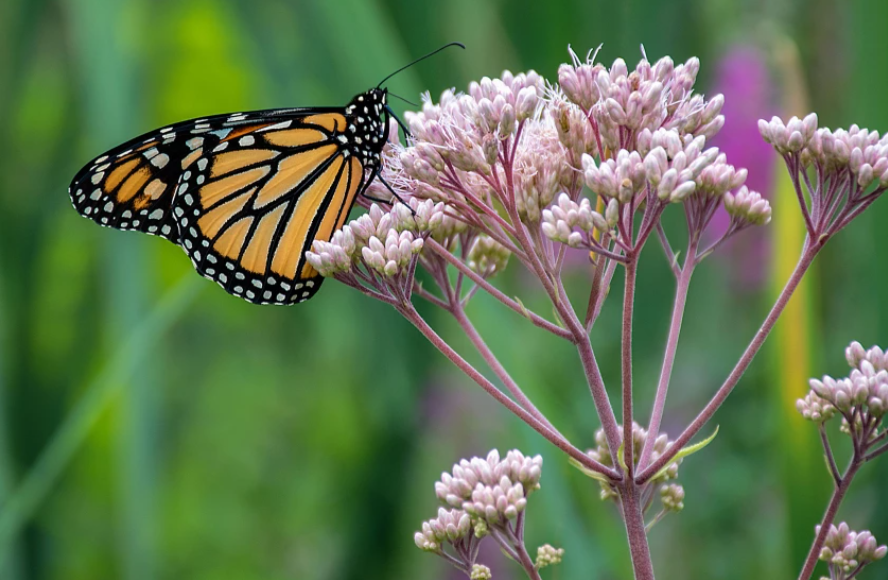 The plants needed to fuel the hungry caterpillars, including narrow-leaf milkweed, are just now coming out of dormancy

Butterfly fans, take a breath. I know it’s officially spring and we’re all pounding on nursery doors, anxious to plant some California native milkweed to help the endangered Western monarch butterfly stay afloat since, yes, milkweed is the only thing its caterpillars will eat and nonnative varieties appear to be hastening its demise.

But here’s the thing: Native milkweeds are still slowly coming back to life.

Native milkweeds — especially narrow-leaf milkweed, the most prominent variety in California — are just now emerging from dormancy, a normal, natural thing that won’t be hurried no matter how we plead, said Patty Roess, manager of the retail portion of the Tree of Life Nursery in San Juan Capistrano, one of Southern California’s premier growers of native plants. “We’ve tried growing native milkweed in different conditions and it’s the same. You can’t change what the plant wants to be: a summer bloomer that goes dormant in midwinter.”

That means the plants big enough to sell weren’t going to be available at most Southern California nurseries until mid-April, or later if the temperatures stay cool. And because of the heavy demand this year and lots of preorders, nursery managers are warning that it might be May or even early summer before they’ll have more native milkweed in stock.

“All our April crop is already reserved out — we’re talking hundreds of plants — and we’re already taking reservations for our May crop,” said Su Kraus, founder and adviser to Moosa Creek Nursery, a wholesale grower of California native plants in Valley Center.

Some people are so eager that they’ve been buying pots of dormant narrow-leaf milkweed (Asclepias fascicularis) at the Santa Barbara Botanic Gardens nursery, says manager Matt Straka. “It looks like just dirt and maybe a twig, and sometimes there isn’t even a twig,” Straka said, “but if you pop the ‘plant’ out of the pot and see white roots along the edge of the soil, that’s a good sign it’s alive but in the dormant stage.”

All this demand is good news, right? Because people are really trying to help the migratory Western monarch whose numbers sank below 2,000 during last year’s Thanksgiving weekend count, down from the millions that used to winter on the California coast some 30 years ago.

Since that disastrous count, the Xerces Society for Invertebrate Conservation has issued a “call to action,” outlining ways the public can help. And two bills were introduced in Congress in mid-March to help fund monarch habitat restoration and preservation.

Feel free to skip to the end, where we’ve listed five places you can purchase milkweeds native to Southern California along with other flowering native plants that provide food for adult monarchs. Because of the demand, you may have to make an advance order at these locations or with your local nursery (lobby them hard if they don’t already sell native milkweed). And remember to be patient, since many nurseries are short staffed, beleaguered by phone calls and orders, and trying to deal with the evolving pandemic like the rest of us.

But if you’re a plant wonk like me, let’s talk about the complexity of the Western monarch situation and why a seemingly simple thing like milkweed poses such a challenging problem.

When things get unbalanced in the natural world, the “solutions” are often more complicated than we have time — or the inclination — to process, and they’re fluid. Researchers get new data and slowly develop new theories, but most of us are impatient. We want to act, do something to help, and we usually grab for the simplest solutions, not realizing that sometimes we’re just making things worse.

Consider milkweed, the sole food for monarch caterpillars. Herbicides and weed eradication programs around roads and farmlands have decimated much of the wild milkweed in California.

People became concerned about the monarch’s plight, and nursery wholesalers began growing lots of tropical milkweed (Asclepias curassavica) for Southern Californian gardeners decades ago. It’s one of the prettiest milkweed varieties, with long thin leaves and thick clusters of orange and yellow blooms, more like an ornamental plant than a classic weed. SoCal gardeners readily added the plants to their yards to help the butterflies and get a front-row seat to the wonder of metamorphosis, from tiny egg to caterpillar to cocoon to butterfly.

Which brings us to the problem. See, tropical milkweed works fine as caterpillar food in colder parts of the United States, when it dies back during the winter, killing any parasites that live on the plants. But in Southern California, tropical milkweed stays green and blooming year-round. Xerces Society researchers believe this evergreen milkweed confuses normal monarch migration and allows harmful microscopic parasites — Ophryocystis elektroscirrha, or OE — to multiply on the plants. Monarch caterpillars end up eating a lot of this nasty parasite as they devour the leaves and researchers believe OE is sickening the adults, messing up their life spans, migration patterns and ability to reproduce.

A pink narrow-leaf milkweed next to an orange tropical milkweed. (Getty Images)

So in the simplest terms, butterfly experts say California native milkweeds, with their pink, white and cream-colored flowers are the only milkweeds we should be planting in Southern California, because they typically go dormant around December (meaning the tops of the plants die back but the roots stay alive), and regrow when things warm up in the spring, around April or May.

You can find a list and photos of the native milkweeds that grow best in your region on the Xerces Society website. Narrow-leaf is the most commonly offered plant at nurseries, but some might also have other varieties, such as the pink-flowered showy milkweed (Asclepias speciosa), woollypod milkweed (Asclepias eriocarpa) with its clusters of cream-colored blooms, and the purple-flowered California milkweed (Asclepias californica).

But NOT in coastal areas

The Xerces Society now warns against planting any milkweed in SoCal’s coastal areas, because even native milkweeds stay green during the mild winters, allowing parasites to multiply. Instead, it recommends that people in coastal areas, especially within five miles of overwintering sites, focus on California native plants that bloom in the winter (November-January) and/or early spring (February-April), to provide nectar for the adult monarch butterflies when they need it most. (Interesting note from the Xerces Society’s publication Protecting California’s Butterfly Groves: Monarchs need temperatures of 55 degrees or higher to be able to fly, and can only crawl helplessly on the ground if they are unlucky enough to fall from their perch. This is why they tend to cluster on certain trees in mild coastal areas, looking for spots that shelter them from wind, rain and predators while still providing enough warmth in the day so they can fly to find food.)

In simple terms, the native milkweed you cultivate in your yard should mimic the life cycle of native milkweed found in the wild, asserts Sarah Maisonneuve, executive director of Earth Discovery Institute, a conservation and environmental education nonprofit in El Cajon.

“Home gardeners should stop watering their milkweed during the winter, so that it will go into its natural phase of dormancy during this time of year,” Maisonneuve said. “Artificially supplying monarchs with milkweed during winter, especially within 5 to 10 miles of overwintering sites, may interrupt the butterflies’ natural life cycle by encouraging them to continue breeding and laying eggs, instead of going into reproductive diapause.”

For those who are growing milkweed that doesn’t go dormant, the recommendation is to cut it back in winter.

It’s critical to make sure the native plants you buy are grown organically, without pesticides. Milkweeds are the monarch caterpillar’s sole food, but they are also a magnet to orange-colored aphids, which are unsightly but harmless to the plant and caterpillars, growers say. Some commercial growers use a systemic chemical pesticide on their milkweed to discourage aphids, but that also makes the plant toxic to the caterpillars. Customers need to be sure they’re buying from “specialized growers, who know how to control aphids without using harmful chemicals,” said Moosa Creek owner Jose Cohen. 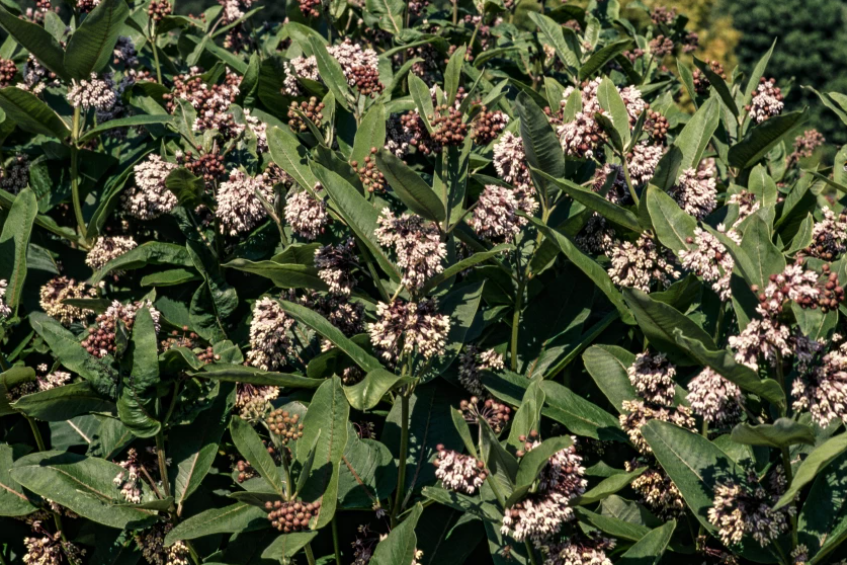 An important note here: Aphids might look yucky but remember, we’re planting native milkweed to create habitat for monarch caterpillars, not decorate our yards. “You’re not growing this for prize-winning flowers,” Straka says.

“People need to know that some bugs are OK to have, but they should expect that the caterpillars and the aphids will totally decimate their narrow-leaf milkweed. They’re going to eat this thing to the stems, but that’s OK because it’s a food source.”

The good news is that gardeners should also be planting lots of nectar-producing native plants as well, to attract and sustain the monarch adults. So if you’re worried about bedraggled-looking milkweed in your yard, surround those plants with beautiful flowering native shrubs and perennials, such as buckwheats, salvias, sunflowers and yarrow. For more specifics, check out the Xerces Society’s list of native monarch nectar plants for California.

“To protect Western monarch butterflies, we need to support them at every stage of their life cycle,” Maisonneuve said. “That means supplying native milkweed, grown without pesticides, during the breeding season (March-September), and growing a variety of nectaring plants throughout the year to support their energy needs.”

The following San Diego County nurseries specialize in native plants and were expected to have at least narrow-leaf milkweed available by mid-April. This is not a complete list; to check for more native plant growers in your area, visit the California Native Plant Society’s CalScape website and be sure to check in with your local retail nurseries to see whether and when they will be selling native milkweed and/or other flowering native plants.

Luca and Micaela Nursery: Offers butterfly host and nectar plants and plants for other pollinators. 545 Smilax Road, Vista; landmnursery.com. It is the nursery arm of nonprofit Butterfly Farms, which focuses on education, conservation and research. 441 Saxony Road, Encinitas; butterflyfarms.org